“The one I kiss is the man; arrest him and lead him away under guard.” 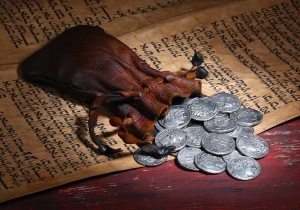 In amongst the blessings of life we all have times when things don’t go our way. We face sickness, pain, loss of jobs, days when dreams don’t come true or someone didn’t come through the way we thought they would.

All of this is part of living in a sinful world filled with imperfect people. And we learn to cope with it. But have you ever been betrayed by someone you love? Have you ever had a time when someone you thought would stick by you pretended they didn’t know you? This goes beyond disappointment. It’s enough to plunge someone into despair.

When Jesus finished praying in the Garden of Gethsemane He walked directly into confrontation. He faced a group of His enemies…and one of His closest friends. The kiss Judas greeted Jesus with was not a kiss of affection. It was a kiss of betrayal intended to identify Jesus to those who wanted to take His life.

Jesus was bound as He walked out of the Garden of Gethsemane, led off to be judged. His friends followed at a distance or I imagine some of them slipped away as not to be taken captive themselves. Either way they didn’t stand at Jesus’ side to plead His case to the man who would judge Him.

We don’t know why Judas agreed to betray Jesus, but we do know that he did it for a few pieces of silver. And we know Judas was so ashamed of what he did, sure he could never be forgiven that he took his own life.

As Jesus walked into the temple to be judged Peter followed. I believe in His heart Peter wanted to protect Jesus and defend Him but I also think he was scared.

Have you ever said something and then wished you could take it back? Perhaps you have treated a friend badly or had a fight with your family, then parted before being able to make it right. It is a terrible feeling.

The good news for Peter was that after Jesus rose from the dead He gave Peter an opportunity to redeem himself. Three times Jesus asked Peter if he loved Jesus. Three times Peter said that he did. And all three times Jesus told Peter to go and take care of others, helping them to know Jesus as Peter himself did. Peter didn’t let Jesus down again.

This same opportunity is available to you and me. No matter what we do, when we genuinely confess and repent to Jesus we will be forgiven. It may take time to repair the damage done to earthly relationships but there is hope for those as well.

The same gift of forgiveness and restoration offered and granted to Peter is there for us too. We only need to ask.

Lord, it can be so easy to judge Peter for turning his back on You when the pressure was on and at the same time so easy to forget that I have most likely done it too. Perhaps it wasn’t a blatant declaration that I didn’t know you but rather keeping quiet in a conversation instead of defending You. Or maybe it was taking credit when I should have given it to You.

Father, please forgive me for these times. Point them out to me so that I can be more aware and stand stronger next time. Thank You for Your gift of forgiveness and the certainty that while I may deny you through my words or actions You will always claim me as Your own and welcome me back with open arms over and over again.