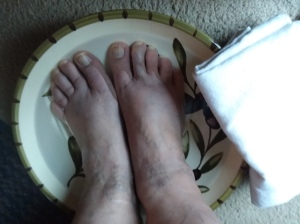 Jesus was a King. He was God living on earth yet He walked everywhere He went. He had no fancy carriage and no palace in which to sleep. Jesus and His disciples slept under the stars and ate whatever they could find. Yet they never went without. Jesus came to earth to demonstrate God’s love for all people by meeting them where they were.

Jesus welcomed children, fed the hungry, healed the sick and lame and loved everyone, no matter their occupation or the sins they had committed. He expected them (and us) to follow His example.

Perhaps one of the greatest acts of servanthood Jesus showed was at their Passover supper the night He was betrayed.

In John 13 we read that as the meal was being served Jesus got up from the meal and removed His outer clothing. He picked up a towel, tied it around His waist and poured water into a basin. Jesus then began to wash the feet of His disciples, drying them with the towel tied around his waist.

There is great significance in this.

First – We just discussed that Jesus and His disciples walked everywhere they went. If they wore shoes at all they were likely only a form of sandals designed to protect the bottom of their feet from rocks and other debris. They were held on by cloth or leather strips, barely covering the tops of their feet as they walked along the dusty roads. Their feet were constantly filthy. Only an individual themselves or a servant would wash his or her feet.

Second – A king was dressed in robes and splendor. Jesus never did wear the kingly robes he deserved, and He removed the only robe He was wearing and replaced it with a towel tied around His waist just as a servant would have worn.

Third – Jesus did the unthinkable. He bent down to His disciples, kneeling before them to wash their feet. This posture of kneeling before someone was again what a servant would do to a master. Not a posture fit for a King.

Some of Jesus’s disciples argued with Him. Imagine if you had spent the day walking through a muddy field or down a dusty dirt road wearing open sandals. You arrive home to find someone famous whom you really admire waiting for you with a bowl of water and a towel ready to wash your feet. Would you be excited, or embarrassed? Most of us would want to run around to the back entrance, hop in the shower and clean up before this person could see us. It was the same way with the disciples.

The lesson Jesus was trying to get across is that it doesn’t matter what position you hold or how much money is in your bank account. It’s irrelevant how many Facebook friends you have or if you rub shoulders with influential people. The only thing that matters to God is how far you are willing to go to show love to others.

Jesus knelt before them and washed their feet.

Jesus allowed His enemies to mock Him, beat Him and whip Him until He could barely stand.

Then Jesus gave His life for His friends. That includes you and me.

If the creator of the world did all of this for us, is it too much for Him to ask us to humble ourselves before others?

I’m going to ponder this today…and hopefully put it into action.

Jesus, you gave us such a beautiful example of loving others. Everywhere You went kindness and mercy flowed from You. Never were you too busy for someone in need and never were You too important for even the least of society. The desire of my heart is to replicate this way of life but I fail more than I succeed. Lord, today show me how I can be more like You. May Your kindness and humility show through me and if others ask about my actions may I lovingly and humbly point them to you.