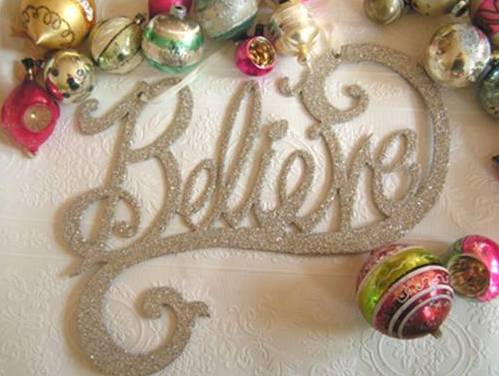 This time of the year we see the word over and over:

Children are curious to believe in Santa Claus

People have permission to believe in miracles.

Everyone is enticed to believe that dreams do come true.

And all are allowed to believe that there is still good in the world.

This time of year there seems to be a magic in the air and a softening of even the hardest hearts. People seem more willing to believe. It can be a beautiful thing.

Believing at Christmas started over two thousand years ago with a young woman named Mary.

She had her life all planned out. Mary was engaged to be married and making preparations to begin her new life with Joseph. She probably dreamed of what their life would be like together, Joseph becoming a leader in their community and she raising the children and making a nice home for her family.

Mary’s dreams were interrupted one day by a visit from an angel telling her that she was soon going to have a baby. What? A baby? How could that be when she and Joseph were only engaged and had not been together inappropriately? What would this news mean for Mary? She would surely be divorced by Joseph, probably disowned by her family and cast out of her community. The news could have shattered her life.

But Mary responded differently. “I am the Lord’s servant,” Mary answered. “May it be to me as you have said.” (Luke 1:38) Mary opened herself to God’s plans even though she didn’t understand and couldn’t piece together how this would affect her future. She believed in God’s plan for her and her future.

God knew before he entrusted Mary with the birth of His Son that she would respond this way. He knew that Mary would embrace what He asked of her and that he could depend on her to do her very best in whatever He asked of her. I love the words of Mary’s cousin Elizabeth as she saw Mary for the first time after the angel’s visit.

45 Blessed is she who has believed that what the Lord has said to her will be accomplished!”  Luke 1:45

When I read this I had to wonder if this could be said about my life. Do I believe?

Do I believe in God’s plan for me?

Do I believe that even when things don’t go the way I thought they would that God is in control and will make everything work out for good?

And do I believe that when I know in my heart of hearts that God has made a promise to me that He will make it come true?

…and it doesn’t stop at Christmas. It’s true throughout the year!

blessings and peace to you this week before Christmas!